Jeff Bloom, executive director and senior vice president of Saint Vincent’s, explained how the relationship between Saint Vincent’s and its US Family Health Plan members is unique among insurance plans.

END_OF_DOCUMENT_TOKEN_TO_BE_REPLACED 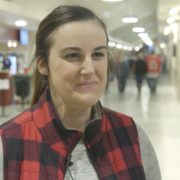 As the only value-based health care offering within the Military Health System, the US Family Health Plan (USFHP) takes a personalized approach to the health, wellness and chronic condition management of more than 150,000 members in six regions of the country.

In a new video, US Family Health Plan members and care providers from the USFHP’s six regional organizations discuss how this personalized approach keeps members satisfied with their health care.

END_OF_DOCUMENT_TOKEN_TO_BE_REPLACED In a new US Family Health Plan video, retiree member Robin Farris shares her personal story about how an astute observation by her health care team during a routine test saved her life.

END_OF_DOCUMENT_TOKEN_TO_BE_REPLACED William “Bill” Ashley enlisted in the U.S. Air Force two weeks before he graduated from his Houston-area high school in 1965. He went on to serve 20 years in the Air Force until his retirement on August 31, 1985 as a senior master sergeant.

Ashley’s military service afforded him the opportunity to attend the Community College of the Air Force, Barry University in Miami, and the University of Houston where he earned a master’s degree. He also met his wife while serving and now has two daughters and three grandchildren.

“Since I’ve left the military, I’ve had a multitude of jobs. I’ve been blessed in the sense that health insurance hasn’t had to be an issue, because it was with me and it’s always been with me. The US Family Health Plan has been a vital part of that,” Ashley says.

Nearly 20 years ago, Ashley joined the US Family Health Plan through Houston-based member organization, CHRISTUS Health. Through US Family Health Plan’s patient-centered approach to health care, Ashley enjoys reliable access to care that is tailored to his needs and personal preferences.

“Accessing care has been great,” he says. “Care has always been available for me. If I need an appointment I can pick up the phone or go online to use the online portal. I don’t like to take a lot of medicine, and so whenever I receive care, one of things I ask is for something I can do that doesn’t involve additional medicine. I am given the opportunity to try other things other than getting drugs to prevent [illness].”

The TRICARE Prime benefit Ashley receives through the US Family Health Plan allows him to see a regular doctor that he chose years ago when joining the plan – a valued option after seeing numerous doctors during his time in the military.

“I like the idea of having my doctor, and I got to choose my doctor, and I’ve been with her ever since. I get an annual physical, my doctor remembers things, and she brings those up and makes sure they are taken care of. When my father passed away, she remembered why he died, and she started checking me for the same things, so things like that are important.”

Ashley appreciates the consistency in care he receives through the US Family Health Plan and the awareness he has developed for his own health care needs through the relationship he has with his doctor.

“If the US Family Health Plan disappeared, it would mean I would lose my doctor of 20 years,” Ashley says. “I have security in my health needs, and I know how to take care of them and navigate that. I would love to stay with what I’ve grown accustomed to and love. I have never considered leaving US Family Health Plan. It’s been a part of my life since I left the military, and I don’t see that changing.”

Ashley is also grateful for the support the US Family Health Plan has given to his church ministry, Windsor Village, in connecting with Houston-area veterans and assisting them with health care, education and housing.

“The US Family Health Plan has sponsored several of our programs, and they have come together to answer questions and help veterans that are in need,” he says.  “I really, really do appreciate it, because one of things I’ve found is veterans are hard to bring into the fold, and with help like we were getting from them, it just makes a big difference.  Veterans need to be taken care of.” Bill Ashley is among nearly 150,000 US Family Health Plan members nationwide who enjoy access to quality healthcare with top-rated patient satisfaction through six regional member organizations offering the TRICARE Prime benefit.  To learn more about US Family Health Plan, watch the interview above or explore the rest of our website. Natalie Poole enlisted in the U.S. Marine Corps at age 18, looking for direction in her life. She couldn’t know that she would complete a decorated 20-year career that spanned several international deployments – including Japan, the Philippines and Saudi Arabia – and earn five Navy Achievement Medals for service above and beyond the call of duty. Her military service, she says, is the best thing she’s ever done.

Upon her retirement as a gunnery sergeant and logistics chief, Poole has remained active, launching a career as an entrepreneur and government contractor while participating in multiple alumni networking groups and the national organization, Disabled American Veterans. Though she remains physically healthy, she wanted to maintain choice and personal autonomy in her health care. After using other care options offered through the Military Health System, Natalie chose the US Family Health Plan at Christus Healthcare for her care.

“US Family Health Plan had the best program of anything out there,” Poole recalls. “Since I was a veteran, I exclusively had the opportunity to take advantage of it. It was all as I expected. Everyone was respectful, efficient, and there were no surprises. And for me that says a lot.”

As a proud US Family Health Plan member for more than six years, Poole continues to appreciate the respectful culture and unwavering reliability her care teams have offered her since the day she enrolled. She emphasizes how an appreciation of military sacrifice permeates throughout Christus Health, fostering an understanding of military culture that helps doctors and care teams work with veterans who may want to handle challenging situations without outside help.

“Aside from whatever I came in for – including my checkups – they’re also asking me different things to open up the floor [on other medical issues]. They actually talk to me about it in a way that’s respectful,” Poole says. “I’m treated like a human being.”

Another benefit Poole enjoys through the plan is access to care when she needs it. There’s no months-long waiting process to see a doctor; when she calls for an appointment, one is scheduled for her within a reasonable time. This is especially important to her because she has two daughters and four grandchildren – further encouragement to stay as healthy as possible. This also encourages her to participate in the preventive health programs which US Family Health Plan promotes for its members.

“As I get older,” Poole says, “I need a health care plan that’s going to grow with me. It’s very important to me to have consistency and someone that I can depend on — a plan that I can depend on. I believe if you promise a thing you should follow through with a thing. The biggest praise I can give US Family Health Plan and Christus Health is they’ve done exactly that.”

Natalie Poole is among nearly 150,000 US Family Health Plan members nationwide who enjoy access to quality healthcare with top-rated patient satisfaction through six regional member organizations offering TRICARE Prime benefits. To learn more about US Family Health Plan, watch the interview above or explore the rest of our website. Chief Halsted knows that caregivers working with military retirees or active-duty families need to have an understanding of the military culture to establish trust, which he says is especially important in medical care. This culture of trust is what drew Halsted and his wife to Martin’s Point and the US Family Health Plan.

“When you step out of the service, and you look for trust – that kind of trust you’ve been used to for a long time – you look for quality care,” he says. “Are you secure day in and day out that you have the right people for you? US Family Health Plan and Martin’s Point were a no-brainer.”

Chief Halsted also discusses the importance of the positive culture and reliable access at Martin’s Point, a major factor in his family’s decision to stay in Maine.

“I’ve seen a lot of care. I couldn’t be happier with US Family Health Plan and Martin’s Point in the care I get from them,” Halsted says. “I know I can be well taken care of. And when I look down the line, at my age, I know they’ll be there for me, and there’s tremendous security in that.”

The Halsteds are among nearly 150,000 US Family Health Plan members nationwide who enjoy access to quality healthcare with top-rated patient satisfaction through six regional TRICARE Prime providers. To learn more about US Family Health Plan, watch the interview above or explore the rest of our website. After a 30-year active-duty career in the U.S. Air Force — including eight years as communications chief on Air Force One — Chief Master Sergeant Michael Tedford has enjoyed nearly a decade of retirement with his wife, Katrina, and their children. Retirement has been “very smooth,” Tedford says, as a result of the reliable and convenient access to quality healthcare he and his wife receive through the Johns Hopkins US Family Health Plan.

“My wife and I have been enrolled in the Plan for nine years,” Tedford says. “The US Family Health Plan has been a phenomenal success, and once we got into it and saw how good it was, we’ve been nothing but big proponents.”

Chief Tedford touts the US Family Health Plan’s convenience of access, a necessity due to a daily commute from his home in Maryland to downtown Washington, D.C., and his and Katrina’s primary care and surgical needs.

“Especially as my wife and I get older, I think it’s going to be significant to our health, because if we didn’t have the Plan available I think our health would suffer as far as the quality and the access. Access is everything,” Tedford says.

The Tedfords are among nearly 150,000 US Family Health Plan members nationwide to enjoy access to quality healthcare with top-rated patient satisfaction through six regional TRICARE Prime provider organizations. To learn more about the US Family Health Plan, watch the interview above or explore the rest of our website. Hall, whose 30 years of service in the U.S. Air Force included a tour in Vietnam, speaks to US Family Health Plan’s familiarity with military culture, high patient satisfaction and commitment to delivering quality healthcare to more than 145,000 beneficiaries nationwide.

“There’s such a deep military culture,” Hall says. “There’s a real appreciation for what military families go through and what they need, both when they’re in their active duty years and when they’re in their retirement years for the best in healthcare. When they hit retirement years, we understand there’s a new set of stressors that comes with retirement, and we want to ensure that healthcare isn’t one of those, that we provide the best healthcare we can.”